Located in the centre of Ireland on the banks of the river Inny, Newcastle House stands on 44 acres of mature parkland, surrounded by 900 acres of forest.

Newcastle Wood was once part of Newcastle Demesne, an estate of some 11,000 hectares run by the King- Harman family in the 1800’s. The beautiful, historic nearby Newcastle House was where the King- Harmans lived and there are many features and place names in the woodland which refer back to that time.

The Harman family appear to have been granted land in the Carlow area in the early 1600’s. Nicholas Harman married Frances Sheppard of Newcastle in the mid 1700’s and the Harman name came to this area. Their son, Lawrence Harman, married Lady Jane King in 1776 and their descendants carried the double barrelled name King- Harman. The King- Harmans were generally regarded as good landlords by the local populace. They employed many local people in all sorts of trades. The last of the King- Harmans died in 1949. King- Harman sold lands to the Forestry Department in 1934 and over the following two years it was planted with a mixture of coniferous and broadleaf trees. The entrance to the larger block of forestry is known locally as Jack’s Gate, the reason being that Jack Clearly lived in the gate lodge across the road and was known to be very strict on providing access to the estate. The gate was opened at 7.45 each morning and locked at 6.00 in the evening, the exception being on Saturday when there was a special dispensation to facilitate local shopping and rambling. The bridge pictured here was an iron footbridge and facilitated the transport of goods across the River Inny at Newcastle House. It was dismantled in 1963 by the Board of Works to facilitate drainage works although the foundation structure is still intact on both banks, as is the location of a boat house just upstream. The River Inny is a main tributary of the Shannon. It is called after the mythological Princess Eithne who drowned and was cremated downstream at the rapids at Tenelick.

Roach and pike can be found in some of the slower glides throughout the year, whilst trout and perch are also sought after. Other indigenous species are eel, gudgeon, crawfish, minnow and hybrids. There is abundant wildlife along the Inny, which can be attributed to the fact that it is one of the cleanest rivers in Ireland. An ecological feature of note is the floating vegetation of ranunculas (floating water crows foot), while there is an unusual abundance of wild clematis or travellers joy growing along the Inny spoil banks. The Inny was dredged as part of a drainage scheme in 1963 to alleviate flooding and the spoil banks date to that work. The Inny below Newcastle Bridge has plentiful rapids and canoeing is popular. The Inny Kayak Club was set up in 1993. 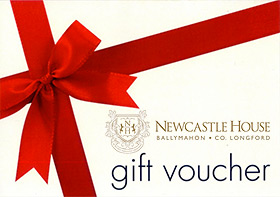